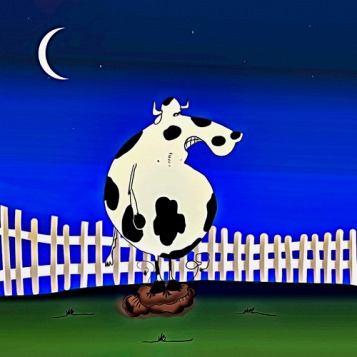 My father used an enormous number of clichés, axioms and old sayings when I was growing up as a kid.

To better understand the repugnance of the saying “shitting and stepping back into it”, you have to understand and appreciate the required misstep one – in this case the cow – has to make, and then understand the anger, frustration, disgust and uncalculated move you (the cow) would have had to make to create this most unfortunate event.

You see, if you have ever had the opportunity to observe four-legged farm animals, be they cows, horses, sheep, goats, etc., or animals in the wild, like elephants, giraffes, lions, or whatever; as they move gracefully through the pasture, or the plains of Africa, you will notice they never step in their own shit.  It doesn’t matter how much shit is on the ground around these animals, they never seem to step in their own shit.  What’s most amazing to me is, these four-legged animals cannot see their feet (certainly not their rear two feet), yet they can walk continuously, going about their way, and never step in the piles of shit that lay in their paths.

However, there are these rare occasions, and rare they are in deed, where the cow will occasionally shit and accidentally step backwards in it.  When this unfortunate occurrence happens, its’ amazing to see how difficult it is for the cow to get the shit off his hoof.  You can also see the dismay on the cow’s face, at the moment this happens.  It’s as though it was saying to itself, dammit, what the hell do I do now.  What the cow does then is to immediately lift the shitty foot in the air and tries to shake off the shit.  Well, if you know anything about getting shit off your shoe, it tops the list of crap that’s seems almost impossible to clean off your shoe – say gum for example.  So, the cow shakes his hoof. and shakes it and shakes it, but to no avail. So the cow just decides to start walking in hopes the shit will just wear off.

The shit in this case is the monumental, colossal failure on Friday to garner enough votes to get their inhumane health care bill through a vote in the House.  As in the case of the cow, the Repugs immediately began trying their damnedest to shake the shit of their embarrassing – egg in your face – setback, using selective finger-pointing, first at each other, then the Speaker of the House, Paul Ryan, then at the Freedom Caucus, then at the Dems, then on the weather, then on Sponge Bob, etc, etc.

But guess what, like the cow, cleaning the shit off their hoofs will be most difficult, and, even if they can, the smell of shit will remain on them for a long while.